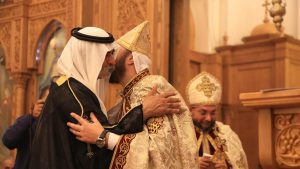 Sheikh Nahyan bin Mubarak Al Nahyan, Minister of Tolerance UAE, is an example to all the world’s leaders. That by building Cultures of Peace and Tolerance we can create a United Earth.

One of the best examples of building Cultures of Peace and Tolerance happened just recently in the United Arab Emirates. The Saint Elias Greek Orthodox Cathedral was inaugurated in Abu Dhabi by the Minister of Tolerance, Sheikh Nahyan bin Mubarak Al Nahyan.   The new Cathedral was blessed by  Patriarch John X Yazigi, Greek Orthodox Patriarch of Antioch and All the East.

“Our presence together in this spiritual celebration is a strong affirmation of the special and strong relationship between the UAE and Lebanon, which is always based on the ideal values and common principles we cherish together,” Sheikh Nahyan said. “We are very pleased to celebrate, with you, the opening of this magnificent cathedral.”

Clash of Civilizations or Cultures of Peace and Tolerance

In his book “The Clash of Civilizations”  Samuel P. Huntington wrote about the theological and ideological war between the cultures of Islam and “The West”. In short, The Clash of Civilizations is a hypothesis that people’s cultural and religious identities will be the primary source of conflict in the post-Cold War world.  Huntington argued that future wars would be fought not between countries, but between cultures, and subsequently, that Islamic extremism would become the biggest threat to world peace.

During humanity’s brief existence on planet earth we have collectively proven ourselves capable of great good. And conversely, unimaginable evil…often times in the name of absolutist ideology and theology. Old Wars based upon religious or political extremism still have a “retro virus” innate ability to inflame the modern world with ancient hatreds.

Politics are Downstream from Culture

But, as the late Senator Daniel Patrick Moynihan said politics are downstream from culture: “it is culture, not politics, that determines the success of a society”.  I believe that if we can create events and institutions that promote Cultures of Peace and Tolerance– the politics will follow.

Sheikh Nahyan’s International leadership, in promoting Peace and Tolerance by building cultural bridges, is an example to all the world’s leaders: we can have Peace…and we can have it now.

By building Cultures of Peace and Tolerance we can create a United Earth. 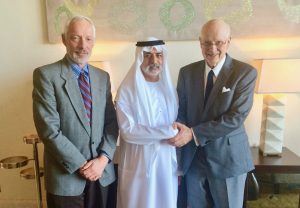 I had the great opportunity during my first visit to Abu Dhabi two years ago to meet and work with His Excellency Sheikh Nahyan Minister of Tolerance  previously Minister of Culture and Knowledge. From left to Right Marcus Nobel, Sheikh Nahyan bin Mubarak Al Nahyan, Claes Nobel. [read more…]