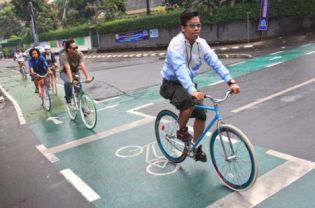 Thousands of Cyclists Pedal Out for Opening of Bike Lane

Cyclists riding down a freshly painted bike lane which stretches 1.4 kilometers along Jalan Mahakam from Ayodya Park in South Jakarta to Melawai on Jalan Iskandarsyah. Governor Fauzi Bowo called on all motorists to respect the lane and leave it clear for bicyclists. (Antara Photo/Reno Esnir)

Five thousand cyclists turned up at Ayodya Park in South Jakarta on Sunday for the inauguration of the city’s first bicycle lane.

The stretch, running 1.4 kilometers from the park down Jalan Mahakam to Melawai on Jalan Iskandarsyah, was officially opened by Jakarta Governor Fauzi Bowo, who deemed it essential for the growing number of cyclists in the city.

“We open this lane in response to the tremendous growth in the number of people commuting by bicycle, and the increase in cycling groups and committees,” Fauzi said.