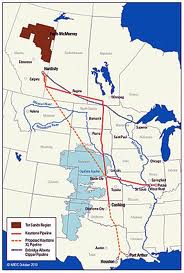 The Keystone XL project would carry crude oil from Canada to the Gulf of Mexico, traveling through Montana, South Dakota, Nebraska, Kansas and Oklahoma before reaching refineries in Houston and Port Arthur, Texas.

The U.S. Environmental Protection Agency (EPA) released a letter Tuesday raising concerns over the environmental effects of TransCanada Corp.’s plan to extend its Keystone pipeline system and asked the State Department to do more analysis of the emissions and safety impacts of the pipeline.

In the letter to the State Department, the EPA said TransCanada ‘s 1,300-mile line has sprung 11 leaks during its one-year lifespan, raising concerns about the company’s plans to nearly double the system’s capacity as part of its so-called Keystone XL project.