Otters are back – in every county in England 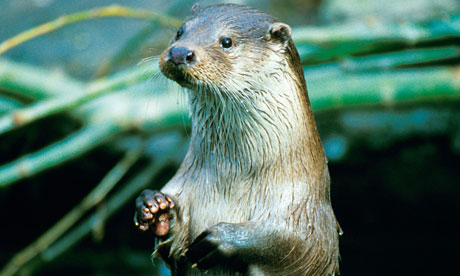 Otters have returned to every county in England in a turnaround of their fortunes which once saw them on the brink of extinction. Photograph: Environment Agency/PA

It has been a long and perilous journey, but otters have finally managed to swim back from the brink of extinction and into every county in England.

Two otters have been spotted building their holts on the banks of the rivers Medway and Eden in Kent, delighting conservationists who had previously predicted they would not return to the county for another 10 years.

Otters have reappeared in places where they have not been seen since the industrial revolution, including Bristol, Birmingham and Manchester, and even on the Thames and the Lea in north London. A recent survey on the river Ribble, in Lancashire, showed a 44% increase in otter numbers since 2008.
[more…]