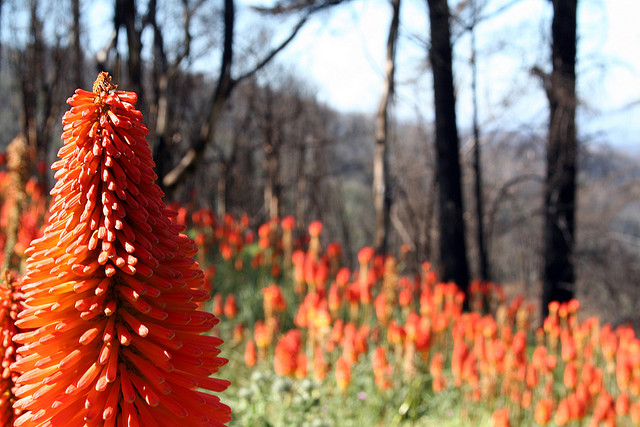 Regrowth in Kinglake National Park. Seeds are thought to be stimulated by chemicals in the smoke and ultraviolet light.

Rare plants are springing up in an Australian park ravaged by bushfires – plants that had never been recorded there before the fire. The astonishing revival is providing new insights into the way ecosystems recover from fire damage.

Over 90 per cent of Kinglake National Park in Victoria was damaged by bushfires in a February 2009 disaster that also claimed 173 lives.[snip]

In addition, plants that had been under threat before the bushfires are now germinating prolifically. These include round-leaf pomaderris (Pomaderris vaccinifolia), silky golden-tip (Goodia lotifolia var. pubescens) and swamp bush-pea (Pultenaea glabra).
[more…]