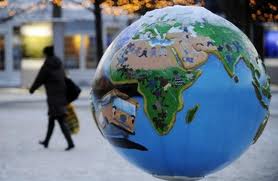 (AFP/File) - A woman walks past a globe exhibition about combatting global warming and climate change in Copenhagen in 2009. Global consumption of natural resources could triple to 140 billion tons a year by 2050 unless consumer nations take drastic steps, the United Nations warned Thursday.(AFP/File/Olivier Morin)

A UN environment panel said the world cannot sustain the tearaway rate of use of minerals, ores and fossil and plant fuels. It called on governments to “decouple” economic growth from natural resource consumption.

With the world population expected to hit 9.3 billion by 2050 and developing nations becoming more prosperous, the report warned “the prospect of much higher resource consumption levels is far beyond what is likely sustainable.”