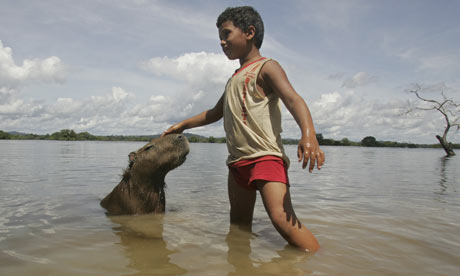 A boy plays with a capybara on the banks of the Xingu River near Altamira, Brazil near where the controversal hydroelectric Belo Monte dam, will be built. Photograph: Andre Penner/AP

Environmental agency grants license to begin building on the Amazon dam, which will be the third biggest in world

Brazil’s environment agency gave its definitive approval on Wednesday for construction of the Belo Monte hydroelectric dam, a controversial $17bn (£10bn) project in the Amazon that has drawn criticism from native Indians and conservationists.

The regulator, Ibama, issued licenses to the consortium in charge of Belo Monte to build the massive dam on the Xingu river, a tributary of the Amazon.

The government has said the 11,200-megawatt project, due to start producing electricity in 2015, is crucial to provide power to Brazil’s fast-growing economy. It will be the world’s third biggest hydroelectric dam after China’s Three Gorges and Itaipu on the border of Brazil and Paraguay.