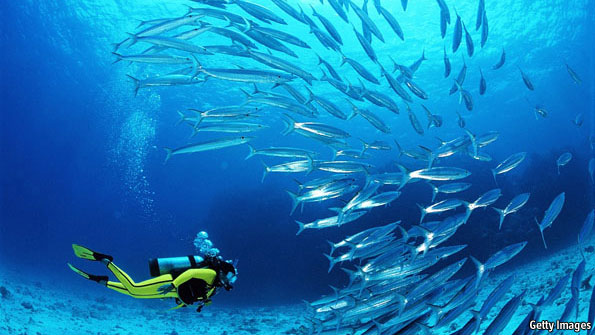 The Great Barrier Reef, is under threat from pollution, overfishing and the warming of the sea.

AUSTRALIANS LIVE CLOSE to nature. Not on the face of things, it’s true: since three-quarters of them inhabit cities of over 100,000 people, they would seem to be well insulated from their natural surroundings. Most have probably never seen a koala or a platypus outside the zoo; many won’t often come across a kangaroo. But for Sydneysiders, say, the chances of meeting a venomous snake or even a deadly spider are not trivial. And above all, literally, is the weather, benign and beautiful much of the time, but often by turns scorching, soaking, dehydrating, burning, blowing, parching, cyclonic, cancer-causing and generally destructive.

That may be one reason why Australians seem especially concerned about the environment. Another, if they are informed, is their awareness that one of their finest natural wonders, the Great Barrier Reef, is under threat from pollution, overfishing and the warming of the sea; to Australians the reef is a source of pride, not to mention $5 billion a year from tourists. Indeed, many parts of the natural world are under threat in Australia. About 40 animal species, it is said, have disappeared there in the past 500 years, and hundreds more are vulnerable.