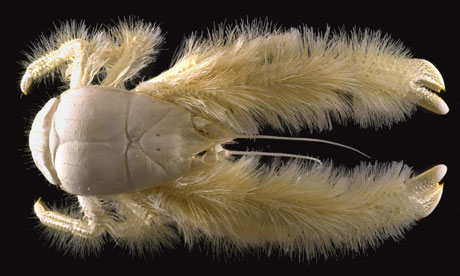 The yeti crab, Kiwa hirsuta, which lives around the hydrothermal vents of the Pacific Antarctic Ridge south of Easter Island. Photograph: A Fifis/AP

Waste dumping, fishing, mining and climate change are transforming the deep sea ecosystem faster than scientists can study it

There’s trouble in the depths. The deep sea is the last true wilderness on Earth, but 1,800 km below the surface, an environmental crisis is growing.

On Monday scientists at the Census of Marine Life (COML) project, the 10-year assessment of the world’s oceans completed in 2010, published their analysis of the impact humans are having on the deep sea. Their conclusions were stark: the largest habitat on Earth is being damaged by pollution, resource exploitation and climate change.
[more…]