Environmental activism needs its own revolution to regain its teeth 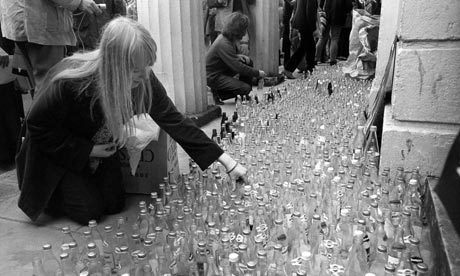 Forty years ago, Friends of the Earth announced its arrival in the UK with a handful of placard-waving volunteers dumping 1,500 non-returnable Schweppes bottles on the front steps of the company’s head office, and demanding that government and industry set up a nationwide recycling network. The media went bonkers. The protest made front page news and the evening TV bulletins. It was the shock of the new.

Try the same trick today, and only a few passers-by would pay any attention. The media is saturated with protest. Revolution in the Middle East what’s making the news, not stunts and marches in central London.

The UK environment movement has grown into a behemoth. [snip] But tactically, the movement has stalled. Despite numerous campaign successes over the years, the most serious problems – climate change, deforestation, ocean degradation, chemical contamination, species extinction – continue to get worse. Commitment to the cause is not enough.