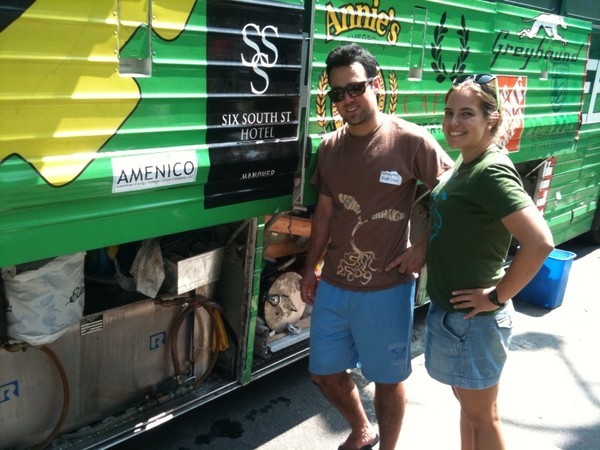 David Garczynski and Jen Fownes, two of the Dartmouth students on the Big Green Bus' summer 2011 tour across the country Credit Andrew Brophy

Liza liked it so much that she wanted to travel on it to a birthday party Saturday afternoon.

But Sue Ellen Powell, her mom, told Liza the 40-foot bus powered by vegetable oil was going to be at the Sherman Green parking lot for a couple more hours. “This was the first bus she’s ever been on, so she was thrilled,” Powell said, holding Liza in her arms.[snip]

David Garczynski, 20, one of the Dartmouth students on the bus, said the 11-week, cross-country trip, which will cover 11,000 miles and 31 states, started last Sunday at Dartmouth College in Hanover, N.H. and would end at the school Sept. 6. Between now and then, the Big Green Bus will visit spots as far west as San Francisco, making stops along the way to educate people about sustainable transportation and environmentalism.

Garczynski said the bus, a 1998 model donated by Greyhound last month, was converted to run on vegetable oil by Dartmouth students and has a 290-gallon tank. He said the bus gets the same miles per gallon (six to seven) as it would get on diesel fuel and that the vegetable oil is donated by sponsors of the trip and restaurants along the way. A lot of vegetable oil that filled the tank before the trip came from Dartmouth’s dining halls, said Jen Fownes, a recent Dartmouth graduate.
[more…]